A. Reading:
The Dear Departed
(Part-I)

‘The Dear Departed" is a famous one act play of William Stanely Haughton. Humour and satire competes in every dialogue of the play. Abel Merry Weather is an old man. His daughters are Mrs. Amelia Slater and Mrs. Elizabeth Jordan. They love only father’s assets but not father. Once they found their father was dead. They start dividing the assets and liabilities. They think of insurance amounts. Their husbands- Henry Slater and Ben Jordan also participate in their work. After some time grand daughter, Victoria announces that the grand father got up.

Idioms, Phrases and Phrasal Verbs
The Dear Departed (idm): This is an idiomatic expression. This means ‘the dead
person’. This phrase is used by people to avoid the word ‘dead’.
Get her own way (idiom): To persuade other people to allow her to do what she wants (to do what she wants in spite of opposition)
Call into (phr) : call to a person to come to some place
Be off (phr.v) : go away / depart / leave
Would never do (phr.) : not appropriate / not suitable in some way
For ages (idiom) : for a long time
Talk over (phr. v) : speak with others about something / have a discussion
Set foot (idiom) : enter
Breaking down (phr. v): failing to function
Arrange with (phr.v) : plan something to include something
Drive a hard bargain (idiom): work hard to negotiate agreements in one’s own favour
Got her eye (idiom) : looked at / noticed
Get rid of (phr. v) : throw away / remove / discard as undesirable
Get off (phr.v) : (here) remove / take off
Take off (phr.v) : remove
Run up (phr.v) : move quickly to some place
Stagger in (phr.v) : walk
Irritating air (phr.) : annoying impression
Give way (idiom) : collapse or fall down suddenly
Down the street (phr.) : in the same street
On purpose (idiom) : intentionally / deliberately
Put up with (phr.v) : tolerate / bear
Nothing short of (idiom): strongly showing the quality of / equal to
Turnover (phr.v) : put someone under the control of someone
For certain (idiom) : without doubt / definitely
Pick up (phr. v) : buy / collect / gather
stockinged feet (phr) : wearing socks, but not wearing shoes

B. Reading:
The Dear Departed
(Part-II)

Idioms, Phrases and Phrasal Verbs
What the devil (phr.) : old fashioned way of showing annoyance or displeasure. This phrase is always used in questions.
Took by surprise (idm) : surprised somebody / happened unexpectedly so that somebody is slightly shocked
What the dickens (idm) : (old-fashioned and informal) used in questions instead of ‘devil’ to show that you are annoyed or surprised
Put on (phr.v) : wear
At a loss (idm) : puzzled
Nothing short of (idm) : as bad as/ as same as/ more or less the same as something bad
In black (phr.) : in dark or black clothes as a sign of mourning at somebody’s death
Bits of things (phr) : property
Put up with (phr.v) : bear / look after / treat
Out of senses (phr.) : silly and senseless /crazy and irrational.
A good while (idm) : for quite some time / or a long time
Look after (phr.v) : take care of somebody or something

C. Reading:
The Brave Potter
Marguerite Siek collected many short stories from different Indian languages. ‘The Brave Potter’ is one of them. One heavy rainy night, tiger rested near a hut. There it was shocked to the words of an old woman. In the mean time a potter comes there in search of his lost donkey. In the darkness he mistook the tiger instead of donkey. Morning villagers wonder to see the tiger tied to a tree. The news reaches the king. He calls the potter and asks him to lead the army in the war to protect the kingdom. Because of fear on riding a horse he strongly holds a tree. Opponent army sees the potter coming with the uprooted tree. All escapes in fear. The enemy king begs pardon. 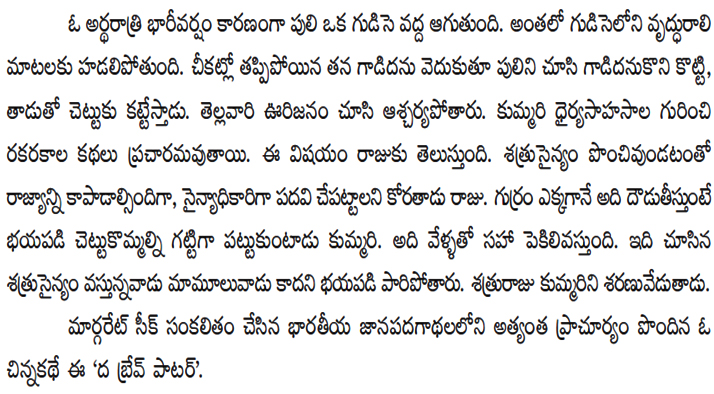 Glossary
Blinding (adj) : very bright
Thatched (adj) : covered with dried straw
Palm-wine (n) : toddy / fermented palm juice drunk by village folk (thaati kallu in Telugu)
Muttered (v) : spoke something unheard
Saddle (n) : a leather seat for a rider on a horse
Stirrups (n) : metal rings that hand down on each side of a horse's saddle, used to support the rider's foot
Pawing (v) : touching something repeatedly with a paw
Hooves (n) : a short jump by an animal with all feet together
Crashing (v) : falling
Reins (n) : long leather bands held by a horse rider to control it
Sentry (n) : guard / a soldier whose job is to guard something
Uprooted (v) : pulled a tree or a plant out of the ground
Cheering crowds (phr) : a large gathering of people shouting in joy

Idioms, Phrases and Phrasal Verbs
Nod off (phr.v) : fall asleep
Would rather (v. phr) : prefer to
Broke out (phr.v) : started
Your Majesty (phr) : way of addressing a king or a queen
Gates of the city (phr) : in the old times a city was protected by huge strong walls and doors against attacks by the enemy
At dawn (phr) : early morning / at the time of sunrise
Bare hands (phr) : (here) without any weapon in hands
Cheering crowds (phr): a large gathering of people shouting in joy?

(Questions 1-7): Read the following conversation from ‘The Dear Departed-I’

Mrs. Slater : (sharply) Victoria, Victoria! D'ye hear? Come in, will you?
Mrs. Slater : I'm amazed at you, Victoria. I really am. Be off now, and change your dress before your Aunt Elizabeth and your Uncle Ben come. It would never do for them to find you in colours with grandfather lying dead, upstairs.

Victoria : What are they coming for? They haven't been here for ages.
Mrs. Slater : They're coming to talk over poor grandpa's affairs. Your father sent them a telegram as soon as we found he was dead. (A noise is heard) (Henry Slater, a stooping, heavy man with a drooping moustache, enters. He is wearing a black tailcoat, grey trousers, a black tie and a bowler hat.)
Henry : I'm wondering if they'll come at all. When you and Elizabeth quarrelled she said she'd never set foot in your house again.
Mrs. Slater : She'll come fast enough after her share of what our father's left. You know how hard she can be when she likes. Where she gets it from I can't tell.
Henry : I suppose it's in the family. (pause) Where are my slippers?
Mrs. Slater : In the kitchen; but you want a new pair, those old ones are nearly worn out. (Nearly breaking down) You don't seem to realize what it's costing me to bear up like I am doing. My heart's fit to break when I see the little trifles that belonged to father lying around, and think he'll never use them again. (Briskly) here! You'd better wear these slippers of my father's now. It's lucky he'd just got a new pair.
Henry : They'll be very small for me, my dear.
Mrs. Slater : They'll stretch, won't they? I'm not going to have them wasted. (She has finished laying the table.) Henry, I've been thinking about that bureau of my father's that's in his bedroom. You know I always wanted to have it after he died.

9. Interview:
Sada : Good morning Mr. Abel. Welcome to TV 3.
Abel : Good morning.
Sada : Tell me about your family.
Abel : I have two daughters, two sons-in-law and a grand daughter.
Sada : Whom do you like most in your family?
Abel : I love my granddaughter Victoria most. She is innocent and loves me much.
Sada : I heard news about your marriage!
Abel : Yes. I am going to marry Mrs. John Shorrocks.
Sada : Why are you going to marry at this old age?
Abel : Good question! My daughters are not looking after me. They wait for my death to collect insurance amount. I need love and care. Mrs. Shorrocks came forward to look after me. She is also facing the same problem. So we decided to marry each other.
Sada : Bold decision. What is the response of your family members to your idea?
Abel : Obviously they disagreed to my proposal. But I need to think of myself.
Sada : Will you give any part of your property to your daughters?
Abel : No! Not at all. I only give it to a person, who looks after me.
Sada : Thank you very much Mr. Abel for spending with us.

Hanu’s Diary
Sunday, 2nd June, 2014.
Today we all enjoyed very much. A funny thing made us to laugh again and again. We played "Thief-Police" game. Neelu, Sonu, Muni also joined with me. In that game Muni acted as thief. As part of the game, Muni pulled Sonu’s bag. Then Sonu shouted "Thief… Thief". All of a sudden few strangers saw that incident. They caught Muni and beat him. We ran to him and explained the strangers about the game.
I never forget today’s funny incident in my life time.

Section-A:
Reading Comprehension
(Questions 1-7): Read the following passage.
A woman was visiting Hyderabad for the first time. She wanted to see the Charminar. Unfortunately, she couldn’t find it, so she asked a police officer for directions.
"Excuse me, officer, how do I get to the Charminar?"The officer replied, "Wait here at this bus stop for the number 65 bus. It’ll take you right there." She thanked the officer and he drove off.
Three hours later the police officer returned to the same area and, sure enough, the woman was still waiting at the same bus stop. The officer got out of his car and said, "Excuse me, but get to the Charminar, I said to wait here for the number 65 bus. That was three hours ago. Why are you still waiting?"
The woman replied, "Don’t worry, officer, it won’t be long now. The 56th bus just went by!"

Now, answer the following questions. Each question has four choices. Choose the correct answer and write (A), (B), (C) or (D) in your answer booklet. (4x1=4 marks)
Paper-II 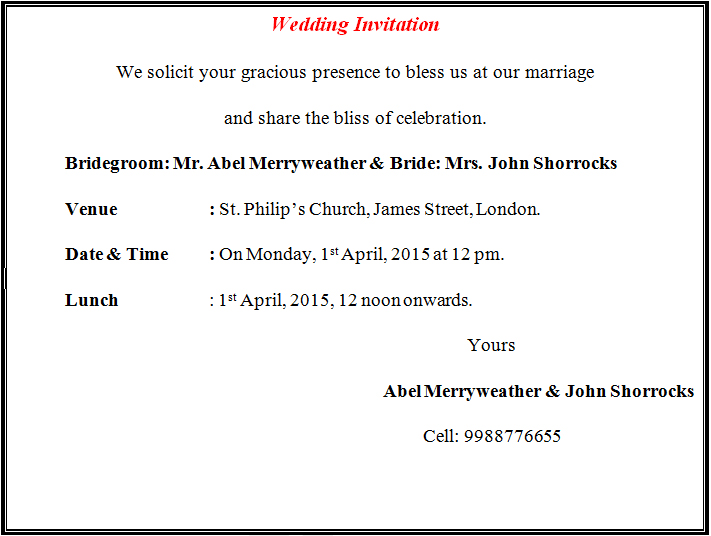