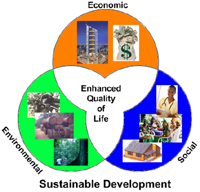 Key Points: Key words: ESSAY ANSWER QUESTIONS
1. “Last but not the least, the key to environmental problem lies in changing life styles that will minimise waste and pollution? 2. Rapid extraction of minerals and other natural resources would adversely impact the future development prospects. Do you agree? 3. Should the average temperature of the earth be treated as the natural resources for all the people?
SHORT ANSWER QUESTIONS

1. Identify at least ten food items that you consume and find out how far they have travelled from their place of production to reach your plate.

2. Why did the people of Jalsindhi village refuse to move out of the village?
3. “This is the land of our forefathers. We have a right to it. If this is lost, then we will only get spades and pickaxes, nothingelse,” says Bala Mahaliya. Can you explain the statement?
A.
4. Why do you think the effects of climate change may be felt by all countries? 5. What are the lessons to be drown from the alternate PDS initiative at Zaheerabad mandal in Telangana State? 6. “Environment is crucial for the lives and livelihood of the local communities and the lifestyles of local communities are harmonious with the environment”. Explain?