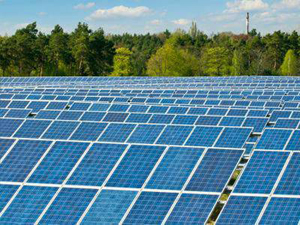 Development of a country would be based on the per capita energy use of a country. India is a country with constant supply side demand. When it comes to South India, all the five states are facing energy shortages. The main reason for this is – over dependence on thermal power and imported fossil fuels. If we need to develop our future energy sources, we should work more on renewable energy sources, particularly on solar energy.

Uninteruppted energy supply has been an engaging topic for several countries in the world. Dwindling natural energy resources on the one hand and growing ecological degeneration on the other reminds us the importance of renewable energy increasingly. Today the world is literally looking at the Sun for its energy. Increasing research and development in solar power has significantly brought down its cost and made the solar power a viable alternative to the fast depleting fossil fuels.

Why only Solar Energy?
According to Ministry of Power, while demand is 3.5 lakh megawatt, installed capacity is only 2.54 lakh megawatt and coal-based thermal power consists about 60.2 per cent. Our over dependence on coal is a major reason for energy shortage in India. As the coal is not mined in required quantities, heavy dependence on coal imports has become the regular practice. Besides that, our distribution losses are as heavy as 24 per cent of power production. The opportunities to augment hydel power production have been curtailed by the fears of environmental damages and public opposition. Though we have abundant natural gas, shale gas and coal bed methane (CBM) reserves, their extraction has been marred by the technical challenges. The nuclear power is also facing its own problem. Though the nuclear power programme has been developed in three phases, reasons for shortage of uranium, delays in research and construction of reactors and dependence of foreign-made reactors has dampened the nuclear power production. The incident of Fukushima nuclear reactors on March 11, 2011 has raised several questions over nuclear safety. Germany and Switzerland have decided to stop nuclear power production on their soils after 2022 and 2035 respectively. In India, the resistance to nuclear power plants is at its high in recent years.

Still 33% of our rural population and 6% of urban population do not avail electricity connection. The gap between supply and demand is only increasing; hence, it is high time that we develop the new and renewable energy sources.

In years to come, rural areas require power not only for domestic and agricultural needs, but also for industrial needs. Nurturing the renewable energy sources will play a crucial role in meeting this growing power requirement.

Types of Solar Power
Solar power is infinite. In India, highest amount of solar insulation is available in Gujarat, Rajasthan and Ladakh and the least of it reaches the Indian Northeast. By using this energy source, we need develop two types of solar power viz. –

As more and more of such appliances are brought into usage, the load on tradition energy resources would come down.

India’s Present Status
India is one of the few countries that have such extensive availability of solar power throughout the year. With about 300 clear, sunny days in a year, India's theoretical solar power reception, on only its land area, is about 5,000 trillion kilowatt-hours (kWh) per year (or 5 EWh/yr). The daily average solar energy incident over India varies from 4 to 7 kWh/m2 with about 1,500–2,000 sunshine hours per year (depending upon location), which is far more than current total energy consumption. For example, assuming the efficiency of PV modules were as low as 10%, this would still be a thousand times greater than the domestic electricity demand projected for 2015.

Due to this, some large projects have been proposed, and a 35,000 km2 (14,000 sq mi) area of the Thar Desert has been set aside for solar power projects, sufficient to generate 700 to 2,100 GW. In July 2009, India unveiled a US$19 billion plan to produce 20 GW of solar power by 2020. Under the plan, the use of solar-powered equipment and applications would be made compulsory in all government buildings, as well as hospitals and hotels. In January 2015, the Indian government significantly expanded its solar plans, targeting US$100 billion of investment and 100 GW of solar capacity by 2022.

According to a 2011 report by BRIDGE TO INDIA and GTM Research, India is facing a perfect storm of factors that will drive solar photovoltaic (PV) adoption at a "furious pace over the next five years and beyond". The falling prices of PV panels, mostly from China but also from the U.S., has coincided with the growing cost of grid power in India. Government support and ample solar resources have also helped to increase solar adoption, but perhaps the biggest factor has been need. India, "as a growing economy with a surging middle class, is now facing a severe electricity deficit that often runs between 10% and 13% of daily need". India is planning to install the World's largest Solar Power Plant with 4,000 MW Capacity near Sambhar Lake in Rajasthan.

There are various factors that we need to consider before investing into a solar power plant. A lot of enthusiasm has been seen among people about the use of Solar Energy as a substitute of conventional sources of energy. However, currently, with the power subsidies in India, solar works economical only in those areas that are using diesel generators as a primary source of electricity. The entire payback is made in 2–3 years. Solar system for petrol pumps is a leading example of such an application. IOCL is leading the race for solarization of petrol pumps with aggressive targets. Solar applications for petrol pumps by RelyOn Solar has been installed in more than 150 IOCL petrol pumps across India and now other oil companies are also looking to solarize their ROs. Solar installations for commercial buildings, where the electricity rates are higher, are also proving to be a game changer for the owners of IT companies.

Costs of Solar Energy
India has all opportunities to develop solar power which doesn’t emit any pollutants; however, it is costly in comparison to traditional energy sources such coal. However, consolidation of technologies, mass production of solar power machinery and appliances would bring down the cost gradually. This will enable grid based solar power production and distribution. While temperate countries like USA are producing solar power on a massive scale, the same task won’t be impossible for India, which is almost a tropical country. In India solar power production is on raise since 1980 and solar power machinery prices have been coming down. There is also increased investment in this sector.

JNNSM
Indian government has started Jawaharlal Nehru National Solar Mission (JNNSM) on January 11, 2010 with the objective to develop 20,000 MW grid-based solar power in India by 2022. The mission was aimed at developing 20 million sq.m. solar thermal collector area. This mission has a long-term approach to bring down solar power production by providing incentives to solar research and development, production of raw material in India and thereby improving the production volumes of everything pertained to solar power. This Mission is being implemented in three phases , which are as following:

In these three phases, changes would be done in the goals based on the conclusions of interim analyses. This Mission strives to develop solar power production, consumption with the help of centralised and decentralised methods. Besides this, the solar power production and distribution would be taken up in the areas that lack power connectivity by making use of off-the-grid method, which means here the distribution would not be done through main grid, but alternative lines of small grids to serve specific areas.

As a part of carry forwarding the work, new directives were issued for selection new grid-based solar projects. Solar projects of 1 MW scale were started in 2011. As expansion of solar power through off-grid method is considered more beneficial, mini SPV systems were introduced. As a part of this, new regulations were introduced pertaining to SPV based water pumping systems, compact florescent lamp (CFL)-based lighting systems, (for instance solar lanterns, home lighting and the street lights) and LED-based lighting systems.

IIT Bombay Solar Services
The IIT Bombay has come forward to extend solar power services to the country. Presently, it is distributing about 10 lakh solar study lamps and also offering 23,500 SPV of 1 KW for the households in the states of Rajasthan, Andhra Pradesh, Kerala, Tamil Nadu and Chhattisgarh.

Solar Cities
Several cities across the world are setting themselves the renewable energy targets to reduce the greenhouse gas emissions. In this background, the Ministry of New and Renewable Energy has initiated ‘Solar Cities’ scheme, which will cover 60 cities. Expansion of solar power footprint with the help municipal governments is its main objective. The scheme helps to secure at least 10 % of power from solar source in the coming five years. In solar cities, wind power, bio power, small-hydel power projects and power from solid waste processing will also get priority. Already, Akshay Urja shops and solar building designs are being encouraged in 48 cities, which have been selected for implementation of this scheme.


Key to Self-Reliance
Solar power is key to attain self-reliance in power production in several remote rural areas of the country. The power availability increases to every household with production of off-grid solar appliances. Increased use of solar lanterns and bulbs, solar street lights, solar cookers and water heaters would reduce the burden on traditional sources of power.

To achieve this feat, awareness levels of people must be improved by the government. One best thing to do towards achieving this goal is making use of self-help groups networks of the women, which wield huge influence in rural Indian life. They can be given small loans to purchase the worthy solar products. In urban areas too, this awareness must be spread. Utilisation of solar power should be encouraged in schools, commercial complexes and parks. As of now, we are depending on other countries for technology and machinery. Hence, it would make sense if we can put efforts to produce them in the country and introduce relevant educational programmes in our education system.

Challenges
Production of 20-60 MW solar power requires one sq.km land (250 acres land). Except in certain pockets such as Thar Desert, it is not possible to pool such vast amounts of land. Even if land is pooled, the power production must outvalue the productive value of the land. This is one of the major hurdles in producing solar power in India.

Opportunities
Still many villages of the country are not electrified. Though most of them have the connection, they are not able to get quality power supply, which is consistent and predictable. By 2004, about 80,000 villages did not have access to electricity. Among them, about 18,000 villages are located so remotely that providing electricity is almost impossible.

Government must show the will
Indian government has been working on different strategies to take solar power to all corners of the country. However, they are not sufficient. Solar power must be taken even to the common men. They must be given incentives to fit photo voltaic panels on their roof tops. Like the telecommunication revolution, there must be a sloar revolution in the country.