The first developmental flight of India's heavy lift launch vehicle GSLV MkIII-D1 was successfully launched on June 05, 2017 from Satish Dhawan Space Centre SHAR, Sriharikota with the launch of GSAT-19 satellite. This was the first orbital mission of GSLV MkIII which was mainly intended to evaluate the vehicle performance including that of its fully indigenous cryogenic upper stage during the flight. 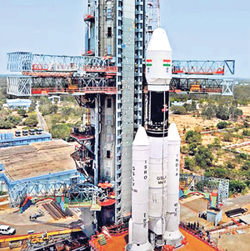 The upper stage of GSLV MkIII vehicle is a new cryogenic stage (C25) indigenously configured, designed and realised by ISRO. The cryogenic stage used liquid Hydrogen and liquid Oxygen as propellants with a total loading of 28 tons. The stage is powered by a 20 ton thrust cryogenic engine (CE20) operating on ‘gas generator cycle’. About sixteen minutes after lift-off, GSAT-19 satellite was successfully placed in orbit.

About the Satellite GSAT-19
Weighing 3136 kg at lift-off, GSAT-19 is the heaviest satellite launched from the Indian soil and is a high throughput communication satellite. In the coming days, GSAT-19 orbit will be raised from its present Geosynchronous Transfer Orbit (GTO) to the final circular Geostationary Orbit (GSO) by firing the satellite's Liquid Apogee Motor (LAM) in stages. During the final phase of this operation, the solar panels and antenna reflectors of the satellite will be deployed. The satellite will be commissioned into service after its positioning in the designated slot in the GSO following in-orbit testing of its payloads.

About the Launch Vehicle GSLV Mk III
GSLV Mk III is a three-stage heavy lift launch vehicle developed by ISRO. The vehicle has two solid strap-ons, a core liquid booster and a cryogenic upper stage.GSLV Mk III is designed to carry 4 ton class of satellites into Geosynchronous Transfer Orbit (GTO) or about 10 tons to Low Earth Orbit (LEO), which is about twice the capability of GSLV Mk II.
The GSLV-Mk III is the heaviest rocket ever made by India and is capable of carrying the heaviest satellites made till date.
Communication Satellites
The Indian National Satellite (INSAT) system is one of the largest domestic communication satellite systems in Asia-Pacific region with nine operational communication satellites placed in Geo-stationary orbit. Established in 1983 with commissioning of INSAT-1B, it initiated a major revolution in India’s communications sector and sustained the same later. GSAT-19 joins the constellation of INSAT System consisting 14 operational satellites, namely - INSAT-3A, 3C, 4A, 4B, 4CR, 3DR and GSAT-6, 7, 8, 10, 12, 14, 15, 16 and 18.