On April 5, 1815, Mount Tambora erupted on the island of Sumbawa in the Dutch East Indies, present day Indonesia. Located along the “Ring of Fire” – the seismic belt surrounding the Pacific Ocean – the volcano’s blast was one of the most severe in recorded history. Nearly 800 miles away in Java, Thomas Stamford Raffles, the lieutenant-governor of British Java and founder of colonial Singapore, mistook the thunderous bang for cannon fire. The eruption’s ash plume was so vast that it literally changed the world’s climate, lowering global temperatures for years. The following year, 1816, became as the “Year without Summer” as the persistent chill from the sun-blocking ash cloud killed crops and disrupted commerce across the globe, from China to America. This foreboding environment inspired Mary Shelley to pen her masterpiece Frankenstein, a tale drawing upon human ambivalence and fear in the face of technology and industrialization.

Perhaps it was timely, then, that just over two hundred years later, on April 5, 2018, U.S. President Donald Trump likewise erupted in fury, announcing a new salvo in the U.S.-China trade war that threatens to cast a choking cloud over the global economy. An escalating trade spat between the United States and China is worrying investors, as both sides threaten tariffs on products from electronics and aircraft, to wine and pork. US President Donald Trump is now considering $100 billion worth of additional tariffs on Chinese goods, on top of the $50 billion he proposed earlier this year. The new tariffs would cover 20% of US imports from China. China, in response to the US, first announced tariffs on $3 billion worth of American products, including wine, pork and ginseng. It has since raised the stakes with an additional 25% tariff on more than 100 American products, from cars to soya beans. The latter would deal a heavy blow to American farmers: soya beans are the United States’ single most valuable export to China, worth $14 billion a year.

Analysts fear that the spat could escalate into a full-blown trade war: a spiral of aggressive retaliation that would hurt global trade and ultimately cost jobs.

Here are the five most important facts about the clash –

Why is Trump proposing these tariffs?
Trump has accused China of unfair trade practices, such as theft of intellectual property. Beijing has denied this. However, many of China's other trading partners have also complained that the country violates World Trade Organization rules and gives local firms an unfair advantage over foreign competitors.

More broadly, the move is part of Trump’s campaign promise to secure better deals for the US, and protect industries such as steel. Trump has argued that the US loses billions of dollars on commerce with virtually every country it trades with, and that “trade wars are good, and easy to win.” China has in turn said that it does not want a trade war, but is not afraid to fight one.

What does this mean for the economy?
Some analysts estimate that a full-blown trade war could cut global economic growth to 2.5% from a projected 3% in 2019, with an even greater impact on growth in the US and China. Investors are clearly worried about the risk of such a conflict: financial markets have rallied whenever tensions have eased, and dipped when they have intensified.

Historically, trade wars have come at great economic cost. In the 1930s, many countries imposed tariffs to protect their economies. The results were disastrous with global trade falling by around half, contributing to mass unemployment and poverty. 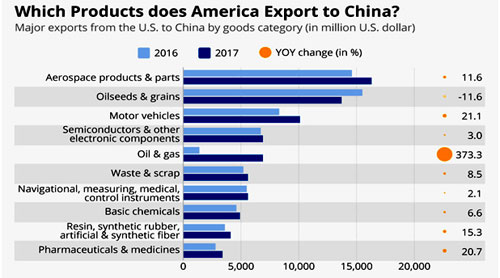 What about individual companies – who are the winners and losers?
A broad range of companies are concerned about the trade dispute. US companies from car makers to retailers have urged the two countries to work together to find a solution. Many American multinationals want to keep selling to the vast Chinese market, while continuing to import its cheap products. China buys $11 billion worth of US vehicles, for example, while shipping relatively few the other way. Technology companies both sell to and manufacture in China. Apple alone generates 20% of its total sales there. Retailers worry that tariffs on Chinese products will hurt American shoppers, raising prices for basic goods from clothes to electronics.

The tit-for-tat could also hurt more traditional sectors like agriculture. American soybean farmers lost an estimated $1.72 billion in a single morning as soybean futures tumbled on the Chinese announcement on tariffs. The American Soybean Association, a farmers' union, has said the Chinese tariffs would be “devastating.”

Chinese firms have also expressed hope that a trade war can be avoided, and have said that accusations of unfair practices are groundless.

Given today’s globalized supply chains, the fallout could go far beyond the US and China. German carmakers, for example, fear that cars made by their subsidiaries in China and sold to the US could be hit by the tariffs. 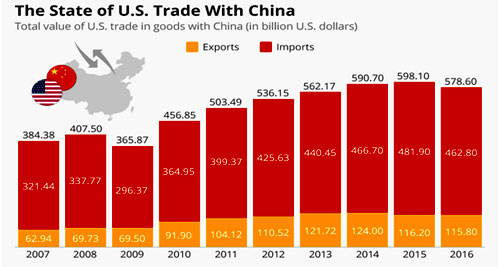 What about the winners?
American metal producers have applauded the tariffs, saying they will raise production to make up for the lost imports. Metalworkers hope the move will revive a battered industry. The president of labour union United Steelworkers has argued that the tariffs will help create jobs and protect a sector that is essential for national security.

The stand-off between the two economic heavyweights could also boost certain bystanders. For example, China is the world’s largest buyer of soybeans, importing 60% of the global crop on the market. As US soybeans become more expensive, exporters such as Brazil and Argentina could benefit. Similarly, top pork exporters such as Germany could reap financial rewards as a direct result of the spat.

What happens next?
China has said it will fight back “at any cost” against further trade action. On the other hand, the Chinese have said that if Trump withdraws the tariffs, they will do the same. This is the outcome financial markets seem to prefer – not least because China is the US’ biggest creditor, and could use this to its advantage should a trade war break out.