Recognizing "renewable energy" and "efficient use of energy" as the most effective routes to mitigate climate-damaging greenhouse gas emissions, India and Germany on Monday decided to move on this path more aggressively under the new 'Indo-German Climate and Renewable Alliance'. 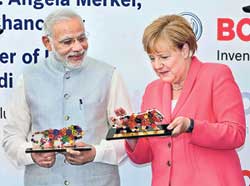 They identified seven focus areas to intensify their ongoing cooperation. Germany, on its part, will provide soft loans worth one billion euros to India for solar projects over the next five years in addition to 1.15 billion euros that Berlin had committed earlier under 'Green Energy Corridors Partnership'.

The alliance will be a comprehensive partnership to harness "technology, innovation and finance" in order to make affordable, clean and renewable energy accessible to all and to foster climate change mitigation efforts in both countries.

Interestingly, both the countries also underlined that "adaptation" must be a central part of a balanced Paris climate agreement - a point which has consistently been raised by India despite being resisted by many rich nations who want a mitigation-centric deal.

The agreement on renewable energy, signed between India and Germany, is in tune with what New Delhi had promised in its climate action plan (called Intended Nationally Determined Contribution - INDC) in the first week of October, 2015

India had told the UN body on climate change on October 1 that the country would increase its share of clean energy by nearly 40% of its total energy mix by the year 2030, provided it gets support of finance and technology from the developed countries. New Delhi also highlighted that the country would need $ 2.5 trillion for this purpose by 2030.

This is where the new 'Indo-German Climate and Renewable Alliance' will come as a boost for India's efforts to move on a low carbon growth path. Prime Minister Narendra Modi too flagged this issue in his statement at a joint press briefing with visiting German chancellor Angela Merkel here on Monday while recognizing Germany's cooperation.

Both the countries also decided to explore opportunities in enhancing cooperation in the field of "climate risk insurance" - an area which is expected to get new focus in the wake of a global climate deal in Paris in December.

Referring to the possible outcome of the Paris climate deal, both India and Germany reaffirmed that "the protocol, another legal instrument or agreed outcome with legal force under the (UN) Convention applicable to all Parties (countries)" will address in a balanced manner all key elements like mitigation, adaptation, finance, technology development and transfer, and capacity-building, and transparency of action and support.

India has consistently been pitching for any such agreement in future that must recognize all these elements under the United Nations Framework Convention on Climate Change (UNFCCC).

Both the countries "regularly discuss climate policy and exchange views with regard to India's and Germany's transition to low-carbon economies and associated co-benefits for sustainable development" under the Forum.