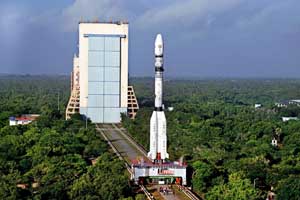 The all-Indian version of the GSLV rocket had the indigenously made Cryogenic Upper Stage, marking India’s success in mastering the highly complex technology. The launch vehicle lifted off at 16:52 hours from the Satish Dhawan Space Centre, Sriharikotta, some 90 km north of Chennai on the East Coast.

It injected the satellite carrying S-Band transponders meant for strategic purposes within 17 minutes and four seconds in the intended geosynchronous transfer orbit. The mission life of the satellite GSAT-6 weighing 2117 kg is nine years.

The current version of the GSLV is capable of launching satellites weighing up to two tonnes into geostationary orbits. This is the second continuous successful GSLV mission using India’s own cryogenic engine, out of the three development flights held so far using it.

The Indian space agency (ISRO) has made a remarkable achievement with the successful flight of the GSLV-D6 using its own cryogenic upper stage, placing its communication satellite GSAT-6 in the intended oval-shaped transfer orbit with text-book precision. Through orbit raising manoeuvres, it will be put into its ultimate geostationary orbit of 36000 kilometer height later.

The success validates India’s expertise in mastering the complex cryogenic technology which has so far been in the exclusive domain of just a few countries. This success of GSLV mission takes India many steps ahead in realizing its dream of attaining self sufficiency in all kinds of satellite launches, including the heavier ones.

ISRO-NASA mission to use GSLV-D6 rocket
The successful launch of the GSAT-6 satellite by GSLV-D6, earning the launcher the “operational rocket” tag, will signal joint collaboration between India’s ISRO and NASA of the United States.

NASA ISRO SAR Mission (NISAR) is expected to be launched on board GSLV-D6 in 2020-21, ISRO Chairman A.S. Kiran Kumar said, adding NISAR would be optimised for studying hazards and global environment change.

ISRO will be launching four nano-satellites from US as a piggy back luggage for its Astrosat, which is scheduled to be launched next month through its workhorse Polar Satellite Launch Vehicle (PSLV).

On the status of testing a reusable launch vehicle Kumar said the plan is to test fly a scaled down model (1/6th size of real size model) later this year. Meanwhile, ISRO officials have said that the space agency is gearing up for atleast 10 launches every year, of which two would be using GSLV rockets.