Gravitational Waves were the last prediction of Albert Einstein’s theory of relativity. The first direct detection of gravitational waves was announced on 11 February by the Advanced Laser Interferometer Gravitational-Wave Observatory (LIGO). 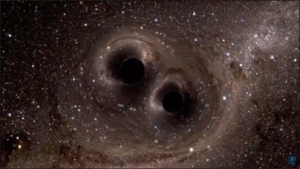 Using LIGO's twin giant detectors — one in Livingston, Louisiana, and the other in Hanford, Washington — researchers measured ripples in space-time produced by a collision between two black holes.

This is the first major detection by LIGO experiments after more than a decade in operation. The new discovery is truly incredible science and marks three milestones for physics:
Importance of Gravitational Waves
About gravitational waves
The denser the mass is, the greater the curvature of space-time. As objects with mass move around in space-time, the curvature also changes to the trail of the moving masses. At times accelerating objects generate changes in this curvature, which propagate outwards in a wave-like manner.

These propagating phenomena are known as gravitational waves. These are outflowing fluctuations of expanding and contracting space time. Not all movements create Gravitational waves; you need to change the Quadruple moment of a mass distribution.

Simply put it means motion should not be perfectly spherically symmetric or cylindrical symmetric.
But two objects orbiting each other in a planar orbit such as a planet orbiting the Sun or a binary star system or merging of two black holes will radiate Gravitational waves! LIGO have detected signals of gravitational waves from two merging black holes 1.3 billion light years, i.e. 1.3 billion years ago

These G-waves propagate at the speed of light, unlike the Newtonian gravity which propagates at infinite speed. This speed limit comes from the fact that speed of light is built into Einstein’s field equations. Therefore, for all massless things this is the ultimate speed limit.

Since G-waves are distortions in space-time, if it passes through a free standing body, the body may experience rhythmic stretching or shortening, without an unbalanced external force

But man may not even notice this stretching, one reason being that these stretching are negligibly miniscule, other reason, everything equally gets stretched, relatively the effect will be null.

But there is one constant in the universe that is absolute, i.e. the speed of light ‘c’, LIGO uses this property of Light(LASER) to measure minute changes in the space time continuum.

The precision that LIGO requires for this kind of detection can be compared to measuring the distance between Milky Way and Andromeda galaxy (2.5 million Light years away) to the scale of the width of a hair.

Gravitational waves carry energy away from their sources and, in the case of orbiting bodies, this is associated with an inspiral or decrease in orbit.

Higher acceleration generates powerful gravitational waves, since these huge systems generating g-waves are millions of light years away; the power that reaches on earth is minuscule.

Orbital lifetimes of binary systems which have high acceleration are one of the most important properties of gravitational radiation sources. It determines the average number of binary stars in the universe that are close enough to be detected.

LIGO is most sensitive in the frequency band where binary systems are about to inspiral, i.e. about to merge. Inspirals are very important sources of gravitational waves.

Any time two objects such as white dwarfs, neutron stars, or black holes are in close orbits, they send out intense gravitational waves. As they spiral closer to each other, these waves become intense.

At some point they should become so intense that direct detection by their effect on objects on Earth is possible.

This time frame is only a few seconds. LIGO achieved sensitivities to detect such a microscopic blip in the cosmic noise after a multiyear shut down and an upgrade.

G- Waves can pass through any intervening matter without being scattered significantly. Whereas light from distant stars may be blocked out by interstellar dust, for example, gravitational waves will pass through essentially unimpeded.

This feature allows G-Waves to carry information about astronomical phenomena never before observed by humans. With this detection we will be able to turn the Universe into our own laboratory.

There are many things that we cannot replicate on Earth, like the dense cores of neutron stars, strangeness of a black hole singularity or event horizon. Under extreme conditions like this, nuclear physics and thermodynamics can theoretically do some interesting things.

Inter-University for Astronomy and Astrophysics (IUCAA) is one of 15 institutes in the country associated with the LIGO project. IUCAA and the Raman Research Institute (RRI), Bangalore, have made significant contribution in the analysis of the LIGO data.

The detection was also contributed to by Indian Initiative in Gravitational Wave Observations (INDIGO).