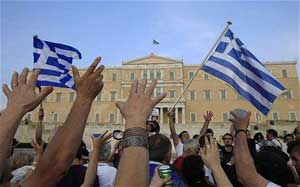 About Crisis
Greek, a small country that accounts for only two per cent of the Euro zone's GDP is making the world get the jitters. If Greece is unable to pay euro 1.5 billion to IMF by 1st July there could be a chain of events ultimately leading to that country's exit from the Euro zone.

In the year 2009, when the global economy was still dealing with the fallout of the global economic slowdown of 2008, Greece announced it had been understating the actual extent of its deficit burden. This set off alarm bells; many questioned the soundness of Greece's finances and doubted its ability to pay back its debt.

Greece's debt-to-GDP ratio surged from 109 per cent in 2008 to 146 per cent in 2010. Following this, the country was downgraded to junk bond status, which cut off its access to bond markets. Investors panicked and turned their attention to other indebted economies, notably Italy, Spain and France.

Bailout plan: To prevent the crisis from escalating, IMF, the European Central Bank and European Commission - nicknamed the troika - organised funds to bail out the country. The first bailout plan comprised a loan of euro 110 billion. But this was not enough, so a second package of euro 130 billion was approved.

However, this was subject to certain conditions. These centred on implementation of severe austerity measures to cut down government debt, structural reforms to propel growth and privatisation of government assets to bring the much-needed revenue and improve efficiency.

The political uncertainty led to a suspension of the remaining tranche of aid, unless Greece accepted the original terms of the bailout or mutually reached an agreement with its public creditors. A negotiation between the parties failed to end the impasse.

Present situation
If the parties are able to arrive at some sort of a deal, it will probably lead to a strengthening of the euro and a relief rally across equities.

But if the talks collapse, it increases the probability of a 'Grexit'. This will lead to volatility across debt, equity and currency markets, and lead portfolio investors to reassess their positions.

A default could lead to flight to quality in the bond market, towards US Treasuries. This would strengthen the dollar against major currencies.

If Greece defaults on its debt, it could also be locked out of the international credit market and be forced to savagely cut government expenditure. This would have an adverse impact on growth and could increase unemployment.

While a default would mean that creditors, especially European banks, would have to take a hit, some analysts argue care has been taken over the past few years to insulate other European countries and the European banking system from the risks of an eventual Greek default. But it is difficult to predict how markets and investors will react.

Greece seems to default, Europe jittery
Greece misses the date with loan repayment, set to become the first nation to default in 21st century; Europe watches nervously as Greeks brace for the referendum on 5th July on reform conditions set by creditors for any bailout.

Greece has confirmed that it would fail to make a key IMF repayment due on 30th June strengthening fears of a chaotic eurozone exit of Greece. This came even as the European Commission, which is EU's executive body said it had offered an eleventh hour deal to Greece Prime Minister Alexis Tsipras to stave off a crisis which could rupture the eurozone and carries the risk of a contagion effect on other troubled economies.

Standard & Poor's Ratings Services has lowered its sovereign rating on Greece to 'CCC minus' from 'CCC', saying the probability of Greece exiting the eurozone was now about 50 percent. This comes as yet another blow to the sinking economy of this European country of little over 11 million people. Of late, the crisis ridden Greece has kept world markets on tenterhooks giving occasional jerks. However it jolted investors across the globe when a deal could not be reached between Greece, IMF and other eurozone member about the possible bailout plans for the ailing economy, over the weekend. This has spooked markets across the globe.

Greece is due to make a €1.6bn payment to the IMF on 30th June - the same day that its current bailout expires. Greek Prime Minister Alexis Tsipras then called for a referendum on the issue to be held on 5th of July. Greek PM Alexis Tsipras has shut down banks for a week and imposed a daily ATM withdrawal limit of 60 euros.