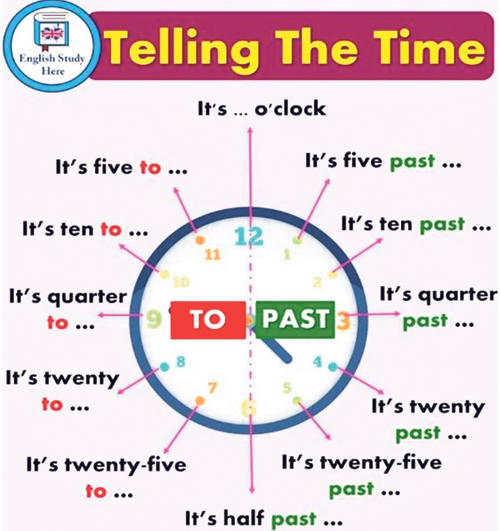 break
break out - spread Eg. Dengue broke out in several parts of the city.
break into - forcibly enter Eg. While they were on a holiday, burglars broke into the house.
break off - to get separated because of force, to stop in between
Eg. The Minister broke off in the middle of his speech. The plane broke off immediately after the take off.
break away - get separated Eg. Most of the MLAs from the break away group got ministerial positions in Karnataka.
break even -Make neither profit nor loss in business or gambling. Eg. The airlines is hoping to reach break even level in the next two years.
break down - cry, burst into tears Eg. On hearing good or bad news, people tend to break down.
break loose - escape Eg. Some prisoners broke loose while there was a power ravage in the jail.
break up- to get separated Eg. The couple had broken up due to acute differences (incompatibility).

TELLING THE TIME
What's the time on the clock below? 5 o'clock, Right! But have you ever thought of why we are using o' before clock? It is very simple. 'o' is the abbreviated form of 'on'. It actually means: 5 on the clock. Clear? This is used only for telling the hours. You can NOT say, 5.30 o' clock. It has to be half past five OR five thirty.


Now, we will look at Telling the Time for different timings. 'Past' 'to' are the two key words in telling the time.