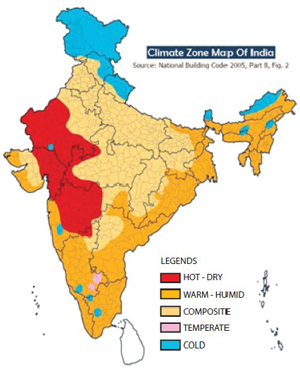 II. Land-Water Relationship:
A large part of southern India, because of its long coast line, comes under moderate influence of the sea. The difference between the temperature of day and night and that of summer and winter is not much. This is known as equable climate.

III. Relief:
The temperature decreases as altitude increases. Hence, hills and mountains will have lower temperature than location on the plain. Several hill stations of the Himalayan region have cool climate even during the peak summer months due to this factor.

IV Upper Atmospheric Circulation:
India lies in the belt of dry north-east trade winds. The climate of India is affected by the movement of upper air currents known as ‘Jet streams’. A jet stream cools the neighboring atmosphere. This cooling effect of the easterly Jet stream causes rains from clouds already hover over 250North latitude.

2. How are human activities contributing to global warming?
3. How is climate change causing global warming? Suggest measures to minimize the influence of the global warming? Short Answer type Questions
1. Write a short note on factors influencing climatic variation in hilly areas and deserts? 2. What are the disagreements between ‘developed’ and ‘developing’ countries about AGW?
3. Read the following statements and means if it is an example of weather or climate.
a. During the last few decade, many glaciers have melted in Himalaya.
Ans: Climate

b. During the last few decades drought in Vidarbha region has increased.
Ans: Climate

4. Match the following.
a). Trivandrum:
(i) Is further from the equator and temperature would be lower in the Winter.

b). Gangtok:
(ii) Is closer to the equator but not close to the seas and has low Rainfall.

c). Anantapur:
(iii) Is closer to equator, and climate has big impact of seas.