Central Government launched ‘Swachh Survekshan-2018’ to rank all the 4,041 cities and towns of the country based on infrastructure development for improved sanitation services and their sustainability, outcomes, citizen connect and visible impact on ground. Minister of Housing and Urban Affairs Narendra Singh Tomar launched the survey, the third in the series and released a comprehensive Survey Tool Kit, explaining the methodology, weightages and new features and thrust areas that help cities and towns prepare for the field survey. 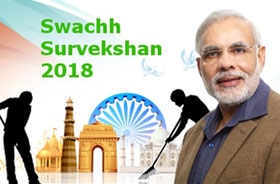 The first Pan-India sanitation survey will assess sanitation levels in all the cities and towns of the country impacting the lives of about 40 crore urban people and is the largest of its kind in the world.

The methodology and weightages for Swachh Surekshan-2018 have been modified to certain extent based on extensive consultations with city and state governments, experts and other stakeholders and in line with the progress of Swachh Bharat Mission (Urban).

The Survey Methodology seeks to capture the efforts under and outcomes of Swachh Bharat Mission (Urban) as the cities move on from building toilets towards Solid Waste Management with emphasis on decentralized solutions, ensuring sustainability of improved sanitation infrastructure and services and enforcement.

The 4,041 cities and towns to be covered under Swachh Survekshan-2018, results of which will be announced in March, 2018 include 500 with a population of one lakh and above each and state capitals and 3,541 with population below one lakh each. For these 3,541 towns, State and Zonal rankings will be announced besides national rankings for the other 500 cities and towns.

Under this survey, cities will be ranked based on 71 sanitation related parameters with different weightages for a total of 4,000 marks. Total score has been doubled this time to avoid crowding of cities with very marginal differences in scores that happened in the previous survey.

Swachh Survekshan-2016 & 2017
As a prelude to encouraging cities to improve urban sanitation, Minister of Housing and Urban Affairs (formerly Ministry of Urban Development) had conducted ‘Swachh Survekshan-2016’ survey for the rating of 73 cities in January 2016 followed by ‘Swachh Survekshan-2017’ conducted in January- February 2017 ranking 434 cities. In a bid to scale up the coverage of the ranking exercise and encourage towns and cities to actively implement mission initiatives in a timely and innovative manner, MoHUA now proposes to conduct its third survey to rank all 4041 cities based on assessment of progress from January 2017 till December 2017 under Swachh Bharat Mission-Urban (SBM-U).

The objective of the survey is to encourage large scale citizen participation and create awareness amongst all sections of society about the importance of working together towards making towns and cities a better place to live in. Additionally, the survey also intends to foster a spirit of healthy competition among towns and cities to improve their service delivery to citizens, towards creating cleaner cities.

Since citizen participation is a very crucial component of this survey, social media and other traditional media channels will be used strategically at both national, state and city levels in order to educate citizens about the objectives of the survey and survey methodology, as well as to reinforce the importance of their participation in the survey, in order to ensure significantly higher levels of participation from all citizens.