A. Reading:
Environment
Wangari Maathai started the Green Belt Movement and also fought for equal rights for women in Africa. She is the first African woman to win the Nobel Peace Prize. NHK Radio of Japan interviewed her. In this interview she shared many of her ideas about environment.

Basic needs of the rural areas can be fulfilled by protecting forests. Like African stool three legs are necessary for society namely peace, good governance and sustainable management of resources. We lost our local biographical diversity. So that’s a lot of damage to our environment. In the beginning restoration is difficult but people soon gained confidence and became competent foresters. We can see two transformations – one is of their landscape and another fight for their rights. She said plant a tree is her greatest activity.

B. Reading:
Or Will The Dreamer Wake?
(Poem)
Medora Chevalier warns the reader to awake an environmental destruction through this poem. Tiger growls in pain in the east about its cubs’ future. White bear snuffles on melting glaciers in the north. Bird thinks about its eggs in the west. Whale sings in doubt in the south. Poet’s grandchild asks "That was the moment! And did the dreamer wake?"

Through his grandchild, poet turns the poem in a different direction to give message.

Glossary
Plaintive (adj) : sounds sad
Snuffles (n) : to breathe noisily through your nose
Gleaming (adj) : to shine softly
Glaciers (n) : a large mass of ice which moves slowly down a mountain valley
Warbles (v) : to sing with a high continuous but quickly changing sound
Birth fills (n) : the process of giving birth to a baby
Solemn (adj) : very serious and not happy

C. Reading:
A Tale of Three Villages
It is a real story of three villages. These three villages are facing lot of health problems and facing death every time due to pollution. It is not by the villagers but from far away rich lands.

Koko village in Nigeria became a dump yard of chemicals by the Italian government. Trucks of dangerous chemical drums were dumped there.

Ponnimanthuri is a village in India. A leather factory in that village is releasing many lethal chemicals, metals like cadmium, arsenic and chromium. The village was affected with ulcer and sores.

Vorobyov is a village in Ukarine (Former USSR). It was affected with explosion from Chernobyl. A big explosion heard on 26th April 1986. The radioactive dust killed many people. The village became barren. 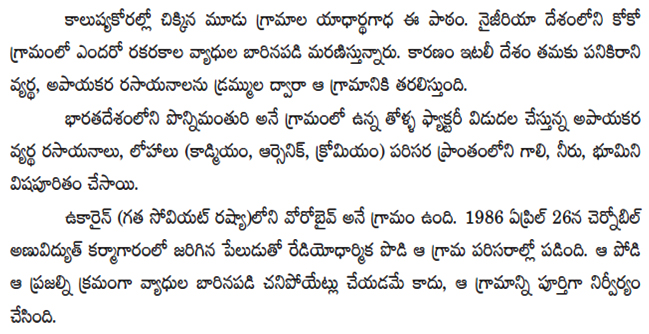 Glossary
Out stretched (v) : stretched out to full length
Trailed off (phr. Verb) : it (voice) becomes gradually quieter and then stops
Apron (n) : piece of clothing that covers the front part of your clothes and is tied around your waist.
Radioactive dust (n) : the dust that comes out of radioactive reaction


Reading Comprehension
(Questions 1-7): Read the following Interview
NHK Radio: What transformations did you see?
W M: One of the bigger transformations that I saw was that ability of an ordinary, illiterate woman to get to understand and to be able to plant trees that in five or ten years became big trees and she was able to cut them and be able to give herself energy; to be able to sell those trees and give herself an income; to be able to feel confident that she had done something for herself. That sense of pride, sense of dignity that they are not begging, that they are doing things for themselves was very empowering. That transformation was very powerful.

The other is the transformation of the landscape. Places where there was dust, there are no more dust. There are trees, even birds and rabbits. They come back and they make the environment very beautiful. There is a shade and sometimes even dry springs come back because the water is not running, the water is going into the ground. Very profound transformation.


Reading Comprehension
(Questions 1-7): Read the following passage.
"How can you buy or sell the sky, the warmth of the land? The idea is strange to us. If we don’t own the freshness of air and the sparkle of water, how can you buy them from us?

We are a part of the Earth and it is a part of us. The perfumed flowers are our sisters, the deer, the horse, the great eagle, these are our brothers. The rocky crests, the juices in the meadows, the body heat of the pony, and the man, all belong to the same family. So, when the Great Chief in Washington sends word that he wishes to buy our land, he asks much of us. The Great White Chief sends word, that he will reserve us a place so that we can live comfortably to ourselves. He will be our father and we will be his children. So we will consider your offer to buy land. But it will not be easy. For this land is sacred to us.