Amaravati, June 16: Taking a new leap in the education field, the State Government has made a pact with Byju’s, an internationally renowned education and tech company, to impart quality education to government school students. 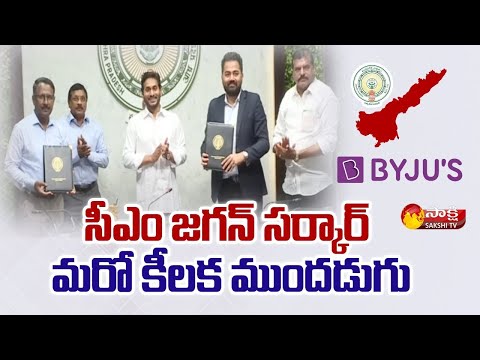 In the presence of Chief Minister YS Jagan Mohan Reddy, the MoU was signed by Commissioner of School Education S Suresh Kumar on behalf of the State while Susmit Sarkar Vice- President (Public Policy) signed for Byju's Speaking on the occasion, Chief Minister said that he was elated to partner with Byju’s, which could change the lives of poor students and help guide them to learn better. He stated that the quality content provided by Byju’s will make it easier for children to understand in the visual medium, and also help them in achieving better results. He said that the initiative will be available for the students studying between class 4-10 in all government schools across the State.

The Chief Minister said that Tabs will be provided to guide the students who are currently studying class 8 and will be appearing for Class X exam in CBSE in 2025. He emphasized on making digital learning methods accessible to the students and impart training for the teachers. He said that the government will be distributing the Tabs to 4.7 lakh students in September at a cost of Rs 500 crore. Byju's content was not available for private schools without paying Rs 20,000-24,000 per year towards subscription, whereas the government has made it available for free to the students studying in government schools, he said and thanked Byju's CEO Ravindran for coming forward to shape a better education system.

During a subsequent review with the authorities, the Chief Minister spoke on the agreement with Byju's‌ and instructed the officers to implement the programme effectively. He directed the authorities to focus on bringing Byju’s content in textbook format in both English and Telugu mediums. Besides these, he asked the officials to install a TV in each classroom under the Nadu-Nedu programme to make visual content accessible to the students. He stressed on imparting quality education especially to the students studying classes VIII, IX and X for achieving good results and stated that a Tab will be given to class VIII students every year, which can be used for subsequent classes too.