The archaeological site of Nalanda Mahavihara, Nalanda University in Bihar has been included in the UNESCO's World Heritage List, which also featured three new sites from China, Iran and Micronesia. 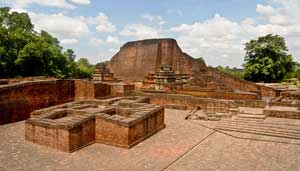 The inclusion of the four new sites was announced at the 40th session of The World Heritage Committee meeting in Istanbul in Turkey. Nalanda stands out as one of the most ancient universities in South Asia.

The site includes stupas, shrines, viharas (residential and educational buildings) and important art works in stucco, stone and metal. The University engaged in the organised transmission of knowledge over an uninterrupted period of 800 years.

The historical development of the site testifies to the development of Buddhism into a religion and the flourishing of monastic and educational traditions.

The Nalanda archaeological site got included in the Tentative List of World Heritage on January 9, 2009.

The nomination dossier was prepared by the Archaeological Survey of India (ASI) and submitted in January 2015 to the World Heritage Committee for the purpose of its inscription in the year 2016.

Besides the site of India, the other names included in the UNESCO World Heritage List are 'The Persian Qanat' of Iran, 'Nan Madol'-- ceremonial centre of Eastern Micronesia -- and 'Zuojiang Huashan Rock Art Cultural Landscape' of China.

With its entry into the coveted UNESCO list, Nalanda University has become the 26th 'cultural site' of India to get the prestigious status.