Mridul Agarwal has topped the IIT JEE-Advanced exams for the year 2021. He created history today by achieving the highest-ever percentile in the IIT entrance test.

A total of 41,862 candidates have qualified in JEE-Advanced this year, of whom 6,452 are female candidates, according to officials.

Kavya Chopra from Delhi was the topper among the female candidates with 286 marks out of 360.

Mridul’s father, Pradeep Agarwal works in the private sector and his mother Pooja is a homemaker.

Mridul’s key to cracking the exam is consistency, self-motivation, preparing a strategy to solve every problem.

For his JEE Advanced preparation, he followed books by foreign authors such as Solomon and Fryhle, LG Wade, JD Lee, Atkins, IE Irodov and Kleppner books.

He plans to join BTech in Computer Science Engineering (CSE) at IIT Bombay. His future plan is to migrate to the US for further studies and would try for either MIT or Stanford.

Mridul has balanced his study and social life. According to reports he never misses his friend's birthdays and also loves partying. He enjoys long drives with his parents and also plays table tennis or bowling with his friends' group to destress himself. 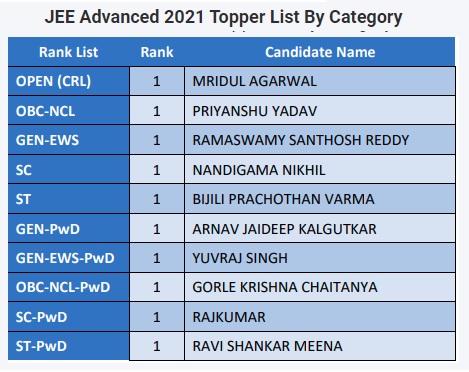 UP Class 10, 12 Board Exam Results Expected in June 1st Week