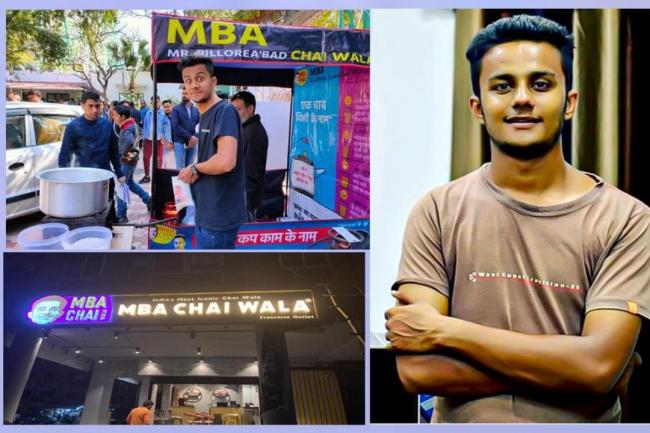 Every year, lakhs of aspirants take MBA admission exams such as the CAT, XAT, and MAT with the hopes of studying business and entrepreneurship at top IIMs. After failing to pass the Common Admission Test (CAT) after three years of preparation, Praful Billore, the son of a farmer from Labravda village in Madhya Pradesh, decided to follow his ambition of becoming a businessman by opening a chai kiosk. He is now a billionaire with 22 outlets across the country and plans to open an international outlet soon.

When Praful failed to pass the CAT on his third attempt, he was crushed. His father continued to counsel him to pursue an MBA for a 'stable' career while he relocated to cities in search of work. He went to work at a McDonald's. After a few months of employment, the boy began selling tea in addition to his job. He begged his father for a Rs 10,000 loan for the sake of 'education,' but instead bought tea utensils. He started selling tea from a kiosk outside his dream college, IIM Ahmedabad.
Gradually, his tea became well-known, and he began to earn more money from the tea business than from his employment. At McDonald's, he was paid Rs 37 per hour. He borrowed another Rs 50,000 from his family and enrolled in a local management college to get an MBA, but he quickly realised that doing business taught him more than studying it. On the seventh day of college, he dropped out and opened a tea shop.

He began networking with IIM students and faculty. He spoke English and was a one-of-a-kind tea salesman in many respects. His business grew, and he began earning roughly Rs 15,000 per month.

His tea stall was soon demolished by local officials, and he was forced to rent a modest area outside a hospital to set up a new one. Mr Billore's Ahmedabad tea stall was his initial name, but many of his customers couldn't pronounce it correctly. He shortened it to MBA (Mr Billore Ahmedabad) Tea Chaiwala after that. The MBA was also his dream degree, and he used to sell tea under the same moniker. However, the stalls have since evolved into tea houses.
He continued to implement new techniques at his new stands, such as placing a whiteboard near a tea stall for people to connect job searchers and employees.

Also read : The success of Jyoti Surekha is inspiring

He remarked in one of his motivational talks on YouTube, "Whatever you do, do it with full honesty, and hard work and success will follow. If you are a shoemaker, be the best shoemaker there is, and if you sell tea, then be the best at it. Whatever you do, give it your best."

Sohan Billore, Praful's father, still owns a business selling worship items in addition to farming and lives a humble existence. He said, "Prafulla was intelligent since childhood. Parful has not gone the traditional way. Parents should understand and cooperate with the children, keeping in mind the feelings of their children so that they can do something in life."

IT Jobs with Any Degree: Check TCS Smart Hiring !!

Foreign Education: Earn While You Study!!

12,400 per month scholarship for PG Scholars

Each district to get one medical college; 2,400 MBBS seats to be added

Cyclone Jawad Effect: Schools Closed in these Districts of AP!

Choice Based Credit System: Choose your preferred subject at your choice of college!!

Schools, colleges in West Bengal to reopen from November 16 onwards

US govt. to give preference to student visas, appointments from November 1