The candidates who are searching for the Union Public Service Commission National Defence Academy and Naval Academy Examination Pattern and Syllabus 2022 can check this page. 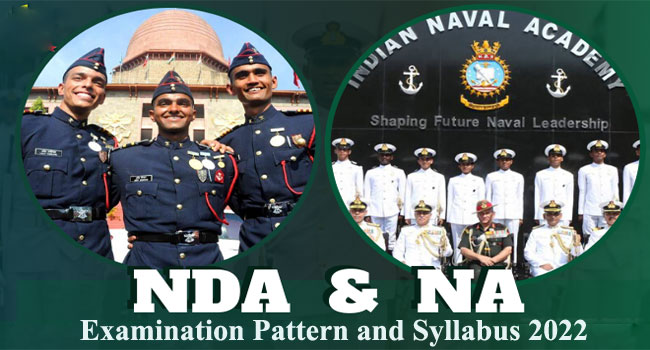 Scheme of Examination: The subjects of the written examination, the time allowed and the maximum marks allotted to each subject will be as follows:

Penalty For Wrong Answers: Candidates should note that there will be penalty (Negative Marking) for wrong answers marked by a candidate in the Objective Type Question Papers.

2. Matrices And Determinants: Types of matrices, operations on matrices. Determinant of a matrix, basic properties of determinants. Adjoint and inverse of a square matrix, Applications-Solution of a system of linear equations in two or three unknowns by Cramer’s rule and by Matrix Method.

The question paper on General Knowledge will broadly cover the subjects: Physics, Chemistry, General Science, Social Studies, Geography and Current Events. The syllabus given below is designed to indicate the scope of these subjects included in this paper. The topics mentioned are not to be regarded as exhaustive and questions on topics of similar nature not specifically mentioned in the syllabus may also be asked. Candidate’s answers are expected to show their knowledge and intelligent understanding of the subject.

The Earth, its shape and size. Lattitudes and Longitudes, Concept of time. International Date Line. Movements of Earth and their effects. Origin of Earth. Rocks and their classification; Weathering—Mechanical and Chemical, ,Earthquakes and Volcanoes. Ocean Currents and Tides Atmosphere and its composition; Temperature and Atmospheric Pressure, Planetary Winds, Cyclones and Anti-cyclones; Humidity; Condensation and Precipitation; Types of Climate, Major Natural regions of the World. Regional Geography of India—Climate, Natural vegetation. Mineral and Power resources; location and distribution of agricultural and Industrial activities. Important Sea ports and main sea, land and air routes of India. Main items of Imports and Exports of India.

Intelligence and Personality Test:- The SSB procedure consists of two stage Selection process - stage I and stage II. Only those candidates who clear the stage I are permitted to appear for stage II.

The personality of a candidate is assessed by three different assessors viz. The Interviewing Officer (IO), Group Testing Officer (GTO) and the Psychologist. There are no separate weightage for each test. The mks are allotted by assessors only after taking into consideration the performance of the candidate holistically in all the test. In addition, marks for Conference are also allotted based on the initial performance of the Candidate in the three techniques and decision of the Board. All these have equal weightage.

The various tests of IO, GTO and Psych are designed to bring out the presence/absence of Officer Like Qualities and their trainability in a candidate. Accordingly candidates are Recommended or Not Recommended at the SSB.

All About NEXT, National Exit Test ...

67 Assistant Geophysicist and other posts @ UPSC